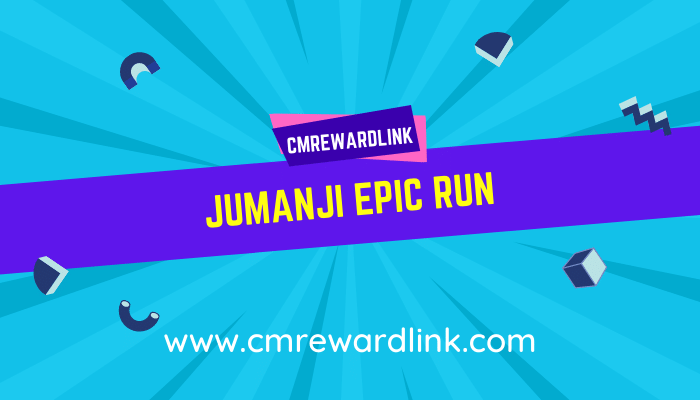 Jumanji, the epic run once again in a fantastic game. The famous sacred falcon jewel gets robbed, and you are on the run to bring it back from the one who stole it while running behind the man and this is the best jumanji epic run game.

The player has to run a crossing the howling hyenas, climb the mountains, jump over the free fall from deadly waterfalls, and fight against the demons your way throughout the levels. The one playing has to avoid the dangerous animals like rhinos, vultures, joggers, and many other animals talking less and running.

Four different techniques one can apply while playing

A new way of running with four epics, it’s a next-level game in the world of Jumanji. Charge yourself for a further one to fight with your enemies.

Moves to take while running is: –

Did you read: – Among Us

The epic environment of the Jumanji game is very adventurous; you need to unlock different parts of the new epic climate as you go on playing. But you need to pay to do that particular level fixed number of coins are asked by that part. Three to four times, it has to be upgraded. Places are as follows The jungle, The Oasis, The dunes, and Mt. Zhatmire.

How to choose your character

If you can select your character during the play, it would be fun. The Jumanji has its Avatar-like Dr. Smolder Bravestone, Franklin”Mouse” Finbar, Ruby roundhouse, or professor Shelly Oberon. The character’s speed increased as you went further in-game.

Each Avatar of the game has its skills and is bright enough in its way. Please don’t leave this opportunity to take complete advantage of skills that are hurt boomerangs, dance, fight with nunchucks, trailblaze with geometric calculations, jump to the highest heights, or ride jungle animals like a horse. It kills all the demons your enemies ea h enemy you get 100 coins. In the next level, you get 200 coins on killing per enemy. You must complete one map and free the next character, ‘Ruby.’

Along with changes in the avatars, the player also gets opportunities to go through this: –

While you’re on the run collecting Jumanji coins and defeating your enemies, you also have to collect power-ups as you keep running sometimes; they may be in the ground, some in the air, so jump and get it during the run going on.

Also, you get a chance to collect a magnet on your way, take a right or left or a jump move to collect. The magnetic effect helps you for a few minutes by pulling all the Jumanji coins towards you for that particular minute, you can focus on your run, and the magnet does its work.

Shields of the Jumanji epic helps and protects you from all the objects in the way it will make you go through that without any harm.

Gold doubler doubles the golds that you collect in the game ahead. Also can watch a video and earn bonus gold bars.

How to make yourself look stylish in the game

Stylish means not in your real-world, but your character played as your proxy in the Jumanji game. Make your character wear different outfits, and looks should be changed that brings spice to the game, and the gameplay becomes more fun. The player has to unlock a new environment and get amazing outfits unlocked. Every single business of your Avatar gifts you with bonus prizes for each power-up you collect throughout the game.

The time you click the run button and the run begins, you start defending yourself and go on collecting coins while you get to see X2 gold bars. If you manage that also in the next few seconds of the game, every single line of the gold bars becomes double a perfect chance to win big also get +500 coins along with it.

The extraordinary use of bow arrow

At the time of your run, you have to collect a bow arrow and as you take it, also get +1000 coins. The bow arrow helps you cut off the enemies that come your way on a temporary period. It goes on clearing your way by cutting off everything.

Opening and achieving the mystery chest of Jumanji

Every level has to be completed with a mission. You have to collect keys to unlock the chest. To reach the wardrobe, you have to go through 5 keys. Once all the five keys get organized, the chest opens, and you get 500 gold bars in the first chest, five power-ups, 15 magnets to grab coins towards yourself. Don’t rush; just okay with a sharp mind.

A notification pops up saying if you want to know when and where your next chest is ready, click OK and visit the map. It shows it clearly. If you defeat three ax wielders, you get a key. If you defeat two vultures, you get a single key like this. The player will be getting many chances of getting the keys.

There are around three chests. The first is free, which means you have to see specific videos and claim the rewards. The second chest is the unique chest to open that you have to pay a 2000 gold bar. The third is the legendary chest, where you have to sacrifice 80 berries to unlock.

Wherever in between the run, you fail to complete the level in case you dash and obstacle the game ends there only. Still, other options are there if you have the power-up, you have to give a specific number or watch a video of around 30 seconds and continue with the same level. But nothing ends with a twister. You have to see the videos full, then only you get to continue the game from there itself.

The secret store of Jumanji epic’s

The epic offer of the Jumanji is as follows.

Jumanji has its progress indicator where your achievements area shown